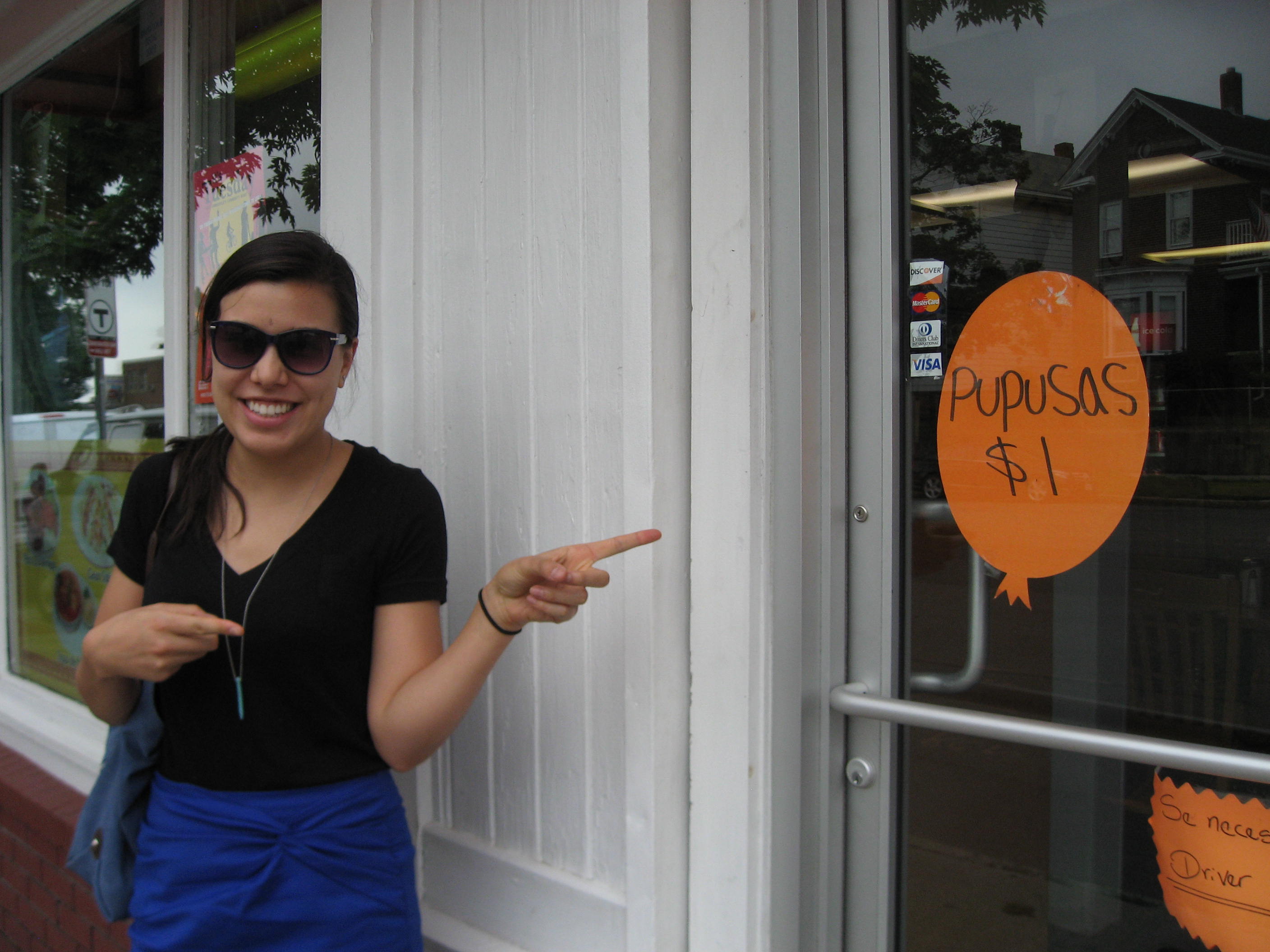 3 days, 3 East Somerville restaurants, $1 pupusas. In this post you will not only learn about these cheap pockets of deliciousness, but exotic drinks to go with them, like agua de tamarindo, chan and agua de marañon. Buen provecho! 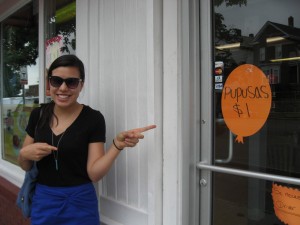 Hello! Rebecca speaking, the summer intern with the Arts Council. I’m a recent Tufts grad with a passion for cooking, eating, and discovering the stories and people behind the eats.  I can be seen here in my natural state: looking excited about my upcoming lunch.

At the Arts Council’s recent Salvadoran cooking class, Rachel Strutt and I were altered to a wondrous phenomenon that would forever change our concept of a cheap lunch: $1 pupusa days in East Somerville. Juan Menjivar our instructor for the day, and an El Salvador native, gave us the facts: On Monday, Tuesday, and Wednesday, three different restaurants on Broadway offer this remarkable deal on the stuffed Salvadoran tortillas. With Juan’s delicious pupusas (and enchiladas, and pasteles) barely settled in our tummies, we were already excited for three consecutive days of cheap & delicious lunch. In the name of research, of course.

Pupusa 101
For those who might not be familiar with the national dish of El Salvador, pupusas are simply masa de maíz, a dough of corn flour and water, stuffed with various delicious things, and then fried to golden brown perfection atop a griddle. Think a thicker, chewier version of a Mexican tortilla, with a crisp outer layer and savory filling within. Common fillings are cheese (usually a soft Salvadoran cheese called quesillo), refried beans and Salvadoran chicharrón –  a fried pork ground to a paste consistency. Pupusas are topped with 2 components: 1, curtido, a lightly fermented carrot and cabbage slaw whose acidity contrasts well with the rich and often cheesy pupusas beneath.  And 2,  a thin, cooked tomato sauce called salsa roja (made with tomatoes, onions, garlic, jalapeños, oregano, and oil).

In El Salvador, pupusas are often sold as street food at pupuserias, local institutions devoted entirely to producing pupusas. And though Americans usually reach for a knife and fork when they see all that curtido and saucy salsa, Salvadorans eat their pupusas hands-only.

Now, onto that crawl! 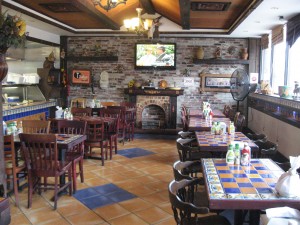 Don’t be deceived by the fact that Maya Sol calls itself a “Mexican Grill”  – its pupusas are the real, Salvadoran deal. The employees we talked to were both from El Salvador, and nestled amongst its menu of popular Mexican dishes like burritos and quesadillas are Salvadoran specialties like enchiladas Salvadoreñas (a thick fried tortilla topped with shredded meat, cheese, and salsa) and of course, those pupusas we keep going on about.

I ordered myself a glass of chan, a sweet, strawberry -flavored drink with chia-looking seeds in it. Further internet research told me that chan seeds (Hyptus suaveolens) are in the same botanical family as chia seeds (Salvia hispanica) BUT are two distinct varieties. Chan also produces oily-rich seeds that are rich in omega-6, whereas chia seeds are rich in omega-3’s. Whatever the omega’s I was drinking, my chan was fruity, refreshing, and fun to drink

due to all those little seeds I got to slurp up. 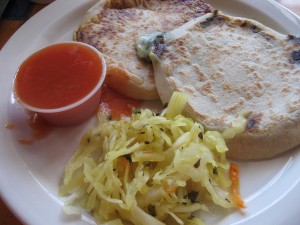 Eager to cut my teeth on $1 pupusas, I ordered 2: One reveultas – meaning ‘scrambled’ or ‘mixed’, this filling is just that – beans, cheese, and chicharrón. To my mind, the holy trinity of pupusa stuffing. And one spinach – a great vegetarian option. Latin American cuisine can often be tricky to navigate with vegetarians in the mix, but with numerous cheese and vegetable combo options, pupusas are one item that everyone can nibble on. As my pupusa plate shows, Maya Sol’s pupusas were circles of chewy on the inside, crispy on the outside perfection. I devoured mine eagerly, and for $4 ($2 for the pupusas, $2 for the chan) left thoroughly satisfied. Maya Sol has many pupusa fans – they make between 500-1,000 pupusas on the $1 day and often cater large orders.

On pupusa crawl day #2,  I was eager to feed my new addiction. I practically sprinted into Los Paisanos with curtido and masa dough on the brain. Our friendly server indulged my attempts to order in Spanish and brought over my glass of agua de tamarindo at a lightning-quick pace. On a hot Somerville day, the sweet-sour tang of this tamarind beverage, made by simply boiling tamarind pods in water with sugar and blending, hit the spot. Beverages are made in house and at $2 for a medium, quite the steal. Los Paisanos also makes a mean horchata (a sweet cinnamon-y rice milk beverage, for which our love is well documented) amongst others. 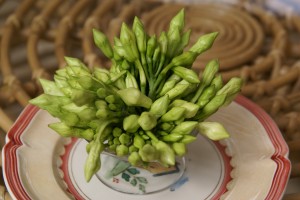 For this round of pupusas, I ordered one revueltas again and one queso con loroco – cheese with loroco flowers.These edible flowers, as seen on the left, grow in several Central American countries and are a uniquely tasty and important part of Salvadoran food. Loroco has a distinctive taste; I would call it almost umami, and some perusing of the interwebs yielded descriptions such as “earthy, artichoke-like flavor” and “with overtones of nuts.” In any case, in combo with salty, creamy cheese and tucked inside a thick tortilla, loroco tastes pretty much like perfection. 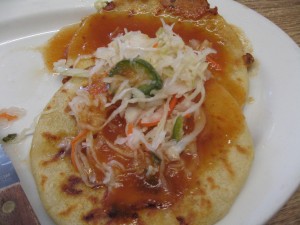 Customers at Los Paisanos are a mix of local Spanish speakers, and usually order 2-4 pupusas at a time, according to our server. (4 pupusas? I accept that challenge.) In addition to the scrumptious pupusas we dined on, Los Paisanos serves up a mix of Salvadoran and Mexican eats that are not to be missed. Their speciality is Plato Los Paisanos, a special lunch or dinner plate with grilled beef, chicharrón, cheese, avocado, chorizo, yuca, salad, rice and beans. I’ll be returning in stretchy pants to get a bite of that! Los Paisanos also serves up big breakfast plates that will satisfy your greatest morning munchies without breaking the bank – the most expensive is a mere $10.50.  All breakfast plates include fried beans, plantains, crema (mexican sour cream), cheese, and avocado. 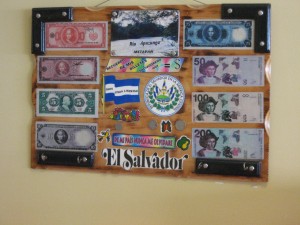 Just down the street from Maya Sol is our last stop on the $1 pupusa tour, Taqueria Montecristo. The restaurant advertises authentic Mexican and Salvadoran cuisine, and a wall sporting a large map of El Salvador and Salvadoran cólons (the former currency of El Salvador, which now uses US dollars) left no doubt to the owner’s homeland. The owners hail from the city of Metapan, in the north of the country.

Pupusas are a speciality at Montecristo, and the restaurant coordinates their $1 pupusa day with the other businesses in the area to make sure no one offers the deal on the same day. On Tuesdays, Montecristo also offers a Mojara Frita special for $10 – a big old fried fish (similar to tilapia) served with salad, beans, and avocado. 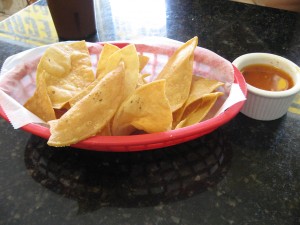 Hungry per usual, I was delighted when our server brought a basket of chips and thin, clear tomato salsa to the table with our menus. I was even happier when I dunked a bite of a thick, fresh-fried chip and found out how delicious that salsa was – it was packed with flavor and spice, but not hot. I’d come back for the chips and salsa alone, but my meal only got better from there. I ordered an agua marañon to drink, a beverage made with cashew fruit – also called cashew apple – the fleshy, soft fruit that is attached to the cashew nut. Cashew fruit has 5 times as much vitamin than an orange, and is used throughout Latin America to make juice – Brazilians have their own version as well. Marañon is pleasantly fruity, resembling a less tart/acidic pineapple taste with an slightly floral aftertaste. In much of South America, it is the apple that is regarded as the delicacy, rather than the attached nut.

I opted for my usual reveultas (hey, it’s everything I like in one little package!) and “splurged” on a $2 chicken tamale.  Being a fiend for all things pickled, I could not have been happier when our server placed a veritable tub of homemade curtido on our table for us. A bold move, I thought, to give someone like me  access to such a large salty, crisp, nicely acidity veggie slaw, but I managed to control myself.

My pupusa was crispy on the outside, yielding to the soft masa and rich creaminess of the revuelta filling on the inside. And it was just lightly salted, marrying perfectly with the salty curtido and salsa I piled on top of it.

Next, I unwrapped my tamale from its banana leaf – the standard wrapping for Salvadoran tamales. A delicious aroma of cooked meat, masa dough and banana leaf aroma hit my nose, and I dug in. The dough was tender yet having that dense, rich taste that makes tamales so good, and the chicken inside was moist and almost brothy. Mmmmm.

Montecristo also happens to make one of my favorite pants-busting treats around – a $6, generously portioned serving of Chicaronnes Salvadorenos – chunks of crispy, salty, fried pork with a layer of- you guessed it- luscious, dissolves- in- your- mouth, fat. Top with a squirt of lime, wrap in the tortillas that come with the plate, and proceed to be happy. I also can’t get enough of their flavorful rice and beans – one bite had me asking what on earth was put into these Salvadoran staples to make them taste so darn good.

There you have it, 3 heavenly days of pupusas. Head down to East Somerville soon to launch your own pupusa bender and let us know what you think! 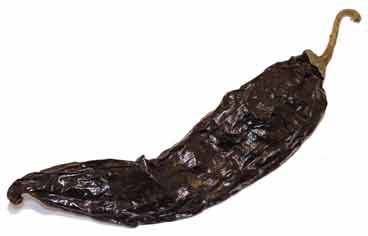 Hot and not so hot 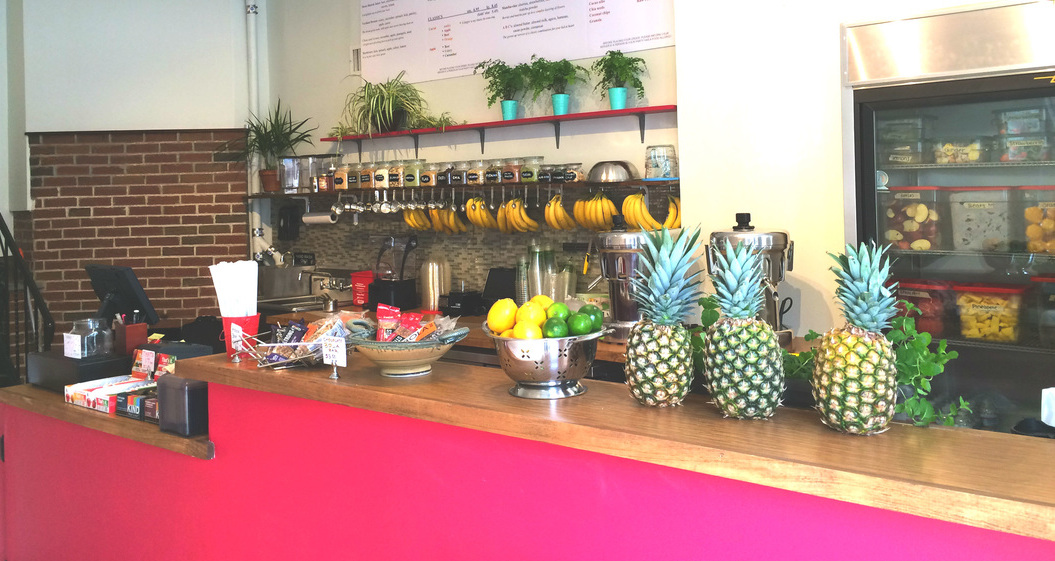 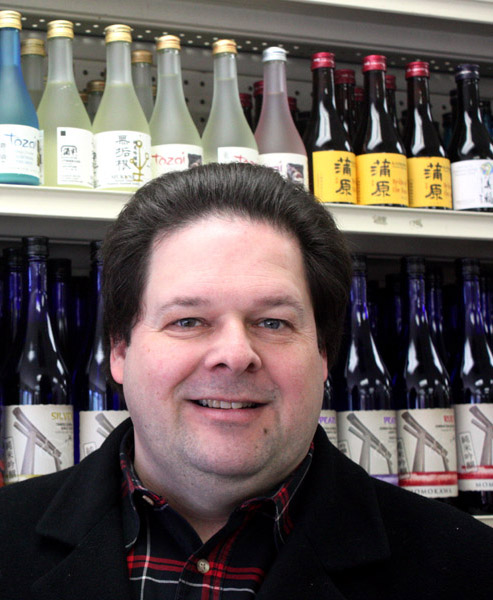 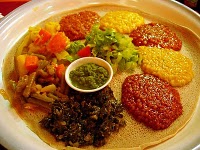