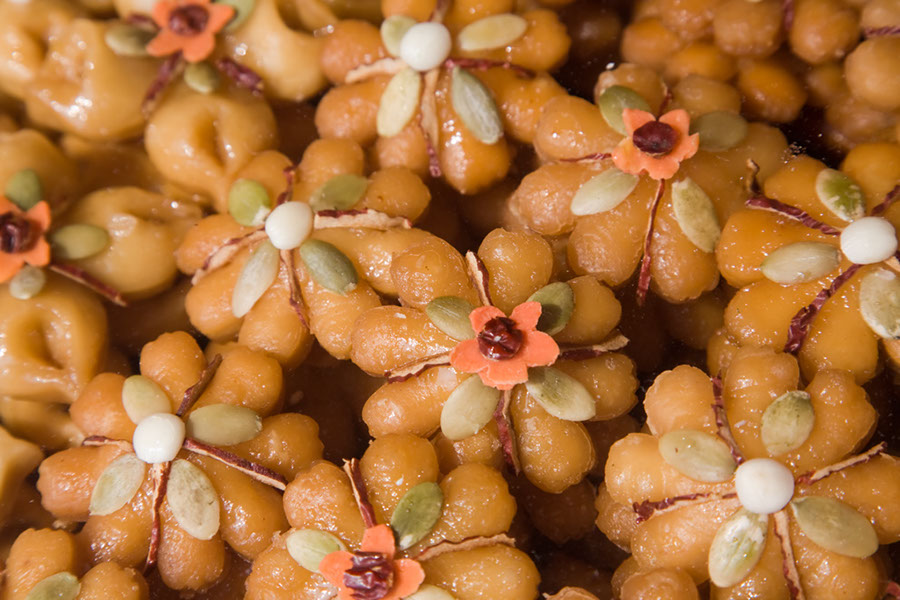 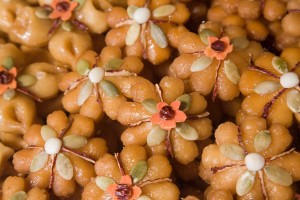 Do like to travel? Do you like to stuff your face while doing so? Yes? Then you may enjoy this month’s exhibit, “Food from Afar,” at the Inside Out Gallery (The Somerville Arts Council’s display windows in the CVS windows in Davis Square). “Food from Afar” showcases the talents and taste buds of local peripatetic photographers. (At left is a photo of Korean “Yakgwa” cookies taken by Christian Waeber.) For the next few Nibble posts, we will be featuring these photographs of far-flung markets and exotic fodder. Plus, our photographers will share the back stories to their work and tell us where they satisfy their yen for foreign food locally. We’ll start with photos of Korean food by Christian Waeber.

Nibble: Can you tell us more about the cookies above, and your other photographs in the “Food From Afar” exhibit?

Christian Waeber: These photographs were taken during various trips I took  to South Korea to visit my fiancée’s family. The pictures of decorated cookies was taken in a display of the various dishes that were traditionally served to the king; these cookies are called Yakgwa. Yakgwa is made mainly from honey, sesame oil, and wheat flour. The picture of mackerels (Godeungeo in Korean) was taken in a fish market; 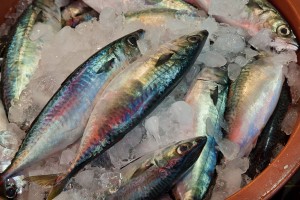 fish freshness is extremely important for Koreans. In fact, fish are usually live in Korean markets, and killed to order. It doesn’t get any fresher than that! Finally, the colorful pancakes, called Chapssal Hwajeon, were photographed in a restaurant serving traditional Buddhist food. These pancakes are made with sweet rice flower. They are usually white, but this picture was taken in a relatively fancy (albeit buddhist!) restaurant that placed significant emphasis on the visuals.

Nibble: What was the inspiration behind taking these pictures?

Waeber: I take pictures of the dishes every time I eat in a Korean restaurant in Korea. I think there is something very unique in the way Korean food is presented. Other cuisines may look good, but they photograph very poorly. In fact, food photography is usually done with dishes that are barely cooked, to preserve the colors. But I noticed that the food served in Korean restaurants almost always photographs very well. The fact that Korean food is always served with many side-dishes (banchan) also makes it interesting to photograph.

Would someone be able to find any of these food items in Somerville? Either in markets or restaurants?

Waeber: I have never seen the colorful sweet rice flower pancakes in the US. Obviously, mackerel is a fish that can be found all over the world, including in New England. As for the homey cakes, they can be found in most Korean stores, including Reliable Market (but they won’t be as good looking as the ones prepared for the king!).

Nibble: Were able to taste the food that you photographed? How did the visual compare to the actual flavor?

Waeber: Since the many pictures I took were taken of the items my friends and I ordered in a restaurant, I have eaten tasted almost everything I photographed. An exception was the honey cakes, which were for display only, under cellophane wrap. But I have often bought these cookies from Reliable Market. As mentioned, Korean cuisine may well be the only food that tastes great and photographs beautifully at the same time, so the flavor was just as good as the visual.

Nibble: Where would you be able to satisfy your taste for exotic food in Somerville?

Waeber: While there is a lot of “exotic” and authentic cuisines in Somerville, I don’t think that the Korean food that can be found in Somerville restaurants is as good as the food one can get in Korea, and it often does not look as great as it does there. But we are lucky to have most of the ingredients available. So if you are willing to learn how to prepare Korean food (Youtube has many excellent videos!), you might be able to make it look and taste as good as in Seoul. 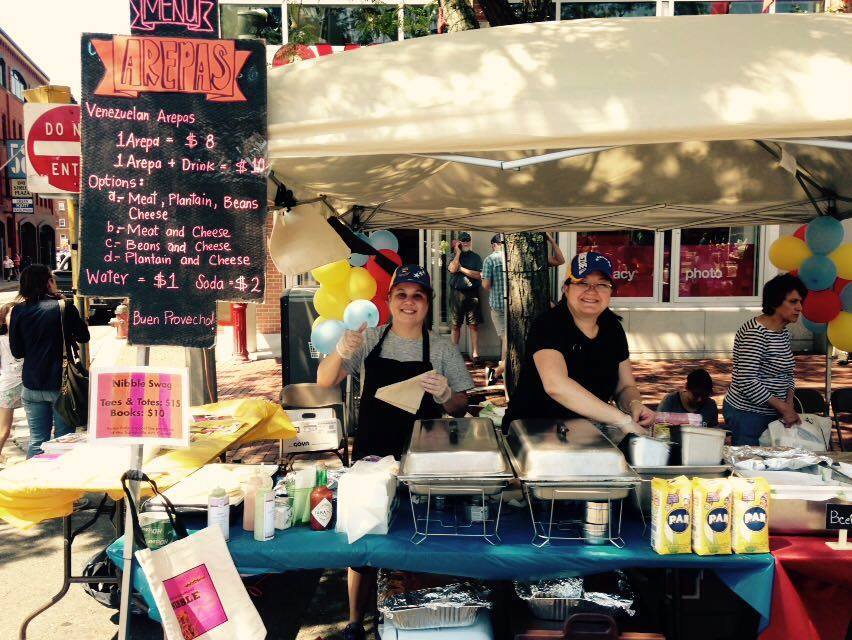 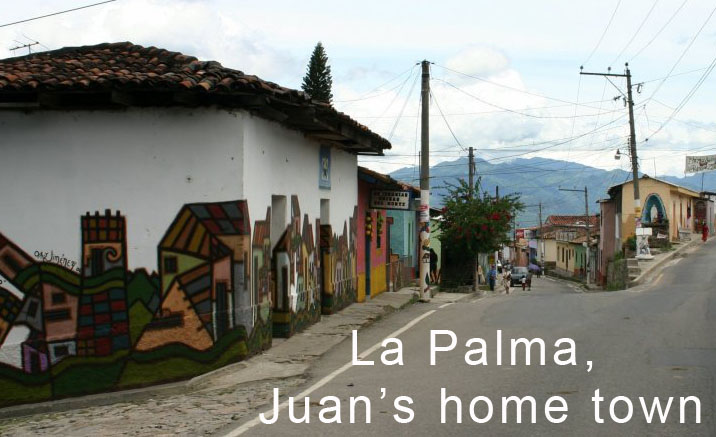 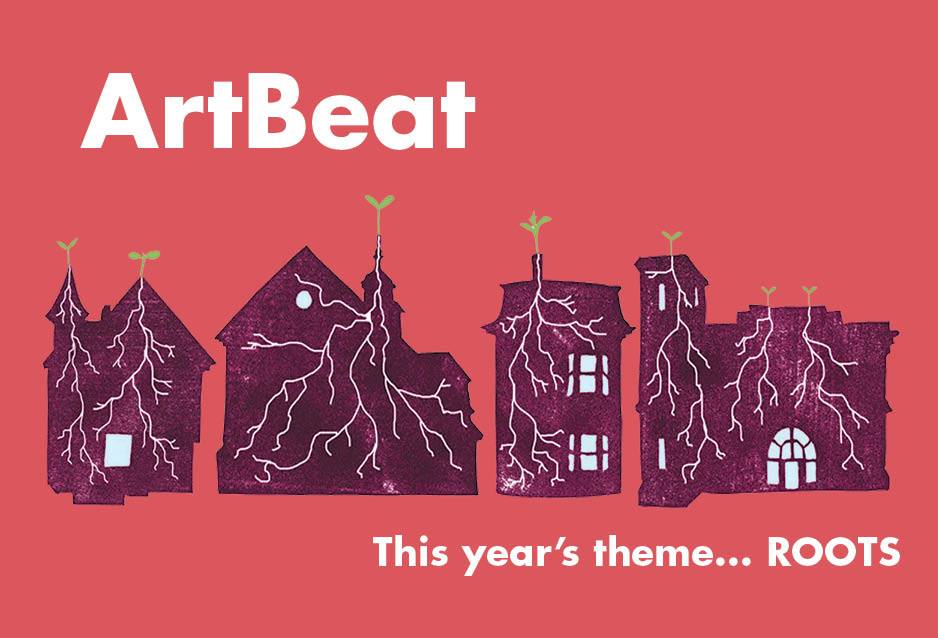